How to: set up a promotion with a CTA button to show a second promo without closing the first (e.g., Terms of Service).

1. Setup a promotion that has a CTA button and input a value into the Data-ID field: in this case, the value is 'terms_cta' 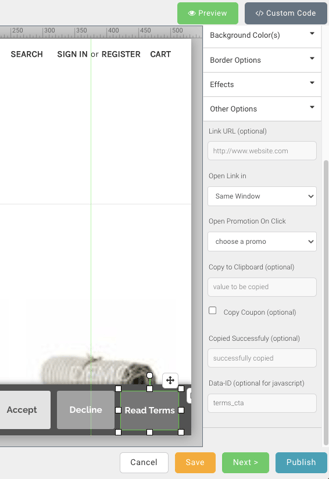 2. Create and design the second second that you would like to display via the CTA button click that was set up in the first promotion. Save this promotion ID, which can be found in the info section of the Promotion promotion section

3. Edit the original promotion that contains the CTA layer. Input the following code snippet into the Pop Up JS tab within the Custom Code section, change 'cmid' (in the code snippet) to the ID of the second promotion (in this case 314797) and toggle it ON: